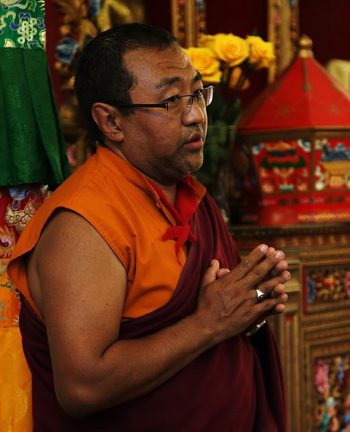 For 2021, with many uncertainties remaining around travel and gathering restrictions, we will not hold two separate events. Instead, we will combine the Vajrayana training program with our annual commitment to 100,000 tsog accumulations in the context of Rigdzin Dupa.

We will post more details about course content and eligibility for participation once we have finalized plans in March — please wait for updates. Thank you for your patience!

We are delighted to announce that Tromge Jigme Rinpoche will continue a series of annual summer retreats covering all aspects of Vajrayana practice, including meditations, deity yoga sadhana, ritual arts and texts relevant to all nine yanas. These retreats are being offered under the auspices of Chagdud Gonpa Foundation, with the aspiration to enrich the sangha’s knowledge and application of the practices His Eminence Chagdud Rinpoche introduced to his students.  The retreat will run for two weeks.

Full-time attendance is required in order to participate in this retreat, whether in-person (if viable by July) or online.

The Rigdzin Düpa sadhana belongs to the Longchen Nyingthig (Heart Essence of the Great Expanse) cycle, which relates primarily to the teachings of Dzogchen. This sadhana is the Inner Guru practice of the Peaceful Male Vidyadhara sadhanas which contain Outer, Inner, Secret and Innermost Secret Guru practices. This cycle was bestowed upon Jigme Lingpa (1729-1798)  through a series of three visions  he had of the great master Longchen Rabjampa (1308-1363), and was soon propagated throughout Tibet, becoming one of the most influential lineages of the Nyingma tradition that continues to this day.

Rigdzin Dupa has been practiced at PPI since 2004 when we were honored to have His Eminence Tsikey Chokling Rinpoche bestow the empowerment and lead the retreat for the first time. From 2004 until the first Drubchen at Ati Ling in 2015, it was practiced as a 100,000 tsog offerings retreat. Jigme Rinpoche also holds the Rigdzin Düpa sadhana as the foundation for the annual one-month Dzogchen retreat in Brazil.