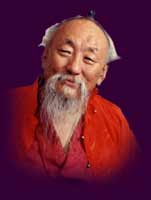 These two pieces were written by Jigme Rinpoche after the cremation of His Eminence Chagdud Tulku Rinpoche, Jigme Rinpoche’s beloved father and teacher, in honor of this great master, and as guidance for his students.

Throughout his life His Eminence Chagdud Tulku Rinpoche displayed the activities of a master in the lineage of the great mahasiddhas and bodhisattvas; he completely dedicated his body, speech and mind to benefit all beings, without having any clinging to his own achievements, or attachment to people or place. It is said that in the Tromge lineage to which Rinpoche was born, every generation has a Tara mahasiddha – Chagdud Rinpoche was the great Tara practitioner of his generation. He upheld the teachings of his own revered lamas, including Tromge Tulku Arig, who was one of the main lamas of Tromge monastery in Kham, eastern Tibet and renowned as an accomplished master. Tromge Arig for many years moved from cave to cave to do retreat, always working to bring benefit to whatever beings had the good fortune to be near him, and as a free spirit he was not bound by ties to his lineage monastery. Likewise our teacher Chagdud Rinpoche travelled to countless places, in the end to literally the other side of the world, and always he moved on once his work in one place was completed. From Tibet to India to Nepal and then to the Americas, as the lama responsible for many groups or centres, Rinpoche helped hundreds of people develop their personal spiritual practice, supporting Tibetans at home and in exile, Tamang Nepalese Buddhists, and later other Asian and Western students. In every place, he would provide whatever was needed, creating conditions that allowed for both present and future success. Along this path he met with Chagdud Khadro, who helped facilitate the vast expansion of his activities, and who today continues to carry out Rinpoche’s wishes with utmost faith and devotion.

Rinpoche’s significance in terms of establishing the Nyingma tradition in North America cannot be underestimated – many lamas consider him to be a regent of Padmasambhava in the West. In this, he was fulfilling the Tara prophecy made in central Tibet that his activity would flourish in the West. But knowing Rinpoche’s limitless desire to bring dharma to as many beings as possible, I often wondered what his next move would be. At one point, while this question was very present in my mind, Rinpoche called me to say he was moving down to Brazil . Although I had not imagined such a move, I did not doubt that in South America as everywhere Rinpoche would fully display his mahasiddha qualities. And so in just a few years Rinpoche created the extraordinarily beautiful, unique complex of buildings and trained up the whole community that is Khadro Ling, the mother centre of all the other Chagdud Gonpa centres in South America . Even then, Rinpoche was not ready to rest — in his last few years he spoke of his plan to build a temple and retreat cabin in Uruguay and live there.

The unbounded love for sentient beings that drove Rinpoche all his life did not end when he passed away. During the final p’howa retreat at Khadro Ling, Rinpoche masterfully demonstrated the teachings of impermanence with his own physical body’s presence in this world coming to an end, cutting through his students’ belief in permanent material phenomena. He knew exactly the time he would go, and how he wanted things to continue after his death, down to the precise details of the retreat centre in Pharping , Nepal where his death ceremonies would be held. Some years back, when Rinpoche was planning this centre, I told him I felt some ideas needed adapting. But in the last year it has become clear to me that with the centre, as with everything, Rinpoche’s vision went far beyond what we could imagine. The final activity of his ku dun (holy body) was to gather sangha from all over the world to practise and reflect together during the death ceremonies, sangha who have now taken back home the blessings of those days, as well as the interdependence nurtured through visiting many sacred sites nearby. The power of such blessings are shared by those who stayed in their countries but practised there with devotion.

After the cremation of a great master, people always ask about the relics. Relics are a sign of a master’s accomplishment, yet some very realised masters do not leave any behind. Through Rinpoche’s great compassion, however, he left many relics. Just as his brilliant activity took many forms throughout time and place, his relics come in richly varied shapes and colours, and some of these relics I will distribute to different centres at the appropriate time and for the appropriate reason.

Since Rinpoche’s passing away, and again since the cremation, many of his students have told me how their practice has strengthened, or that longstanding obstacles have been overcome. Several people who never even met him but somehow made a connection with his sangha speak of how he has touched their lives. All these experiences are ongoing reminders that while Rinpoche is resting in the pure land of Padmasambhava, he is as close as ever to anyone who prays to him with genuine devotion.

Following In The Footsteps Of Our Precious Teacher

I have seen many students demonstrate their faith and devotion to Chagdud Rinpoche, which has touched me, and brought me great joy. As we all know, Rinpoche is a highly realised being, and his teachings are like nectar. Remembering how Rinpoche showed us the force of impermanence, and how death can also come to us at any moment, those who have received teachings directly from him must apply them as he instructed. We should rejoice in having met such rare and precious teachings, and fully integrate them into our lives and intentions, maintaining their purity so that they never become polluted by worldly actions and attitudes. Some people who did not meet Rinpoche personally still have been able to receive certain teachings from his qualified lamas. Then it is as if they knew Rinpoche directly, because these lamas hold the teachings of Chagdud Rinpoche in their heart. We may not realise all the ways in which his blessings can manifest: only later might we see the fruits of the hundreds of teachings and empowerments Rinpoche gave over the years. Although we received these teachings, in many cases the seeds planted will not have fully ripened yet. In order for them to do so, and for the practices to be helpful as Rinpoche intended, it is crucial for people to go into retreat as often as possible, even for short periods of time, and to ceaselessly practice guru yoga.

It is my sincere hope that our Chagdud Gonpa sanghas everywhere in the world will stay united, and never forget their commitment to benefit countless beings. Also, we should take care not to fall into a tribal kind of approach, thinking ‘Oh, I’m from Ati Ling’ or ‘I’m from the main centre such-and-such’. This is not dharma — we are all Rinpoche’s sangha, so we should all think ‘I am Chagdud Gonpa sangha’. The lamas can help to instil a sense of oneness within the sangha and centres, which will be much more beneficial in the long run. If we go down an individualistic path, the flow of blessings Rinpoche created will run dry. We have much more strength when we understand ourselves to be Rinpoche’s sangha, and can draw on that strength in our work. While Khadro Ling is certainly the mother centre in South America and Rigdzin Ling the mother centre in North America , the sanghas there should treat sangha from elsewhere, and in fact any newcomers, with equal love, care and respect. Senior students in these centres are the ones that others look to for support – the gompas provide refuge; a refuge that we can all safely turn to. If those sangha become obnoxious, unfriendly, unhelpful, then where is our refuge?

For as long as the lamas and sangha of Chagdud Gonpa support and respect each other, and remain united in upholding our enlightened master’s teachings and intentions, Rinpoche’s activity will continue to flourish. As vajra brothers and sisters, each lama appointed by Rinpoche should maintain their samaya, keep Rinpoche’s teachings in their heart, blend them with their mind, and dedicate their life to benefiting beings in the way Rinpoche did. Just as the deities manifest different qualities, so the lamas appointed will have different activities according to their own karma, understanding and abilities. They will work for their centres and sangha in different ways, all equally beneficial, to meet the huge variety of needs of countless beings. And then, when lamas give teachings with perfect motivation, the words and meaning can become a teaching for the lamas themselves, by helping them to re-establish their positive intention, and by bringing deeper understanding and joy to their path, facilitating their retreats. In this way, the seeds Rinpoche planted in his lama’s hearts and minds will blossom into the beautiful flowers he envisaged.

I feel that Chagdud Rinpoche’s students’ practice and understanding is most inspiring, and even somewhat unique in the West. Looking at our sanghas in both North and South America, what they do and what they represent as practitioners is very impressive and touching, for example in terms of their training in Vajrayana ritual. As a humble student and son of Chagdud Tulku Rinpoche, this gives me great hope and confidence for the future.