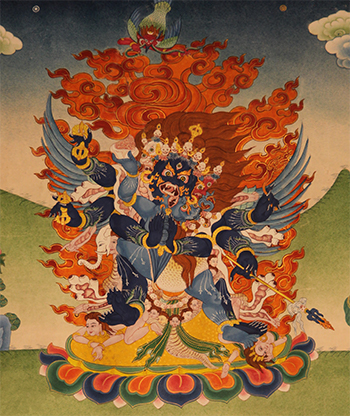 This time we will be doing Vajrakilaya later in the lunar year than usual — in February instead of December. Tromge Jigme Rinpoche will lead the Drupchod, which will be live-streamed. Empowerment in the Dudjom lineage is required. Registration will be posted in December.

Text inserts you will need:

OFFERINGS: Whether or not you are able to participate in this event, it is possible to make an offering for the tsog or butterlamps, with prayers that auspicious conditions prevail for the flourishing of this practice and for the benefit of all beings. Butterlamps are $1.50 each; tsog offerings can be in any amount. There are several ways to make offerings:

1) To make an offering by credit card online follow the link below and from the pull-down “Program Designation”, select tsog or butterlamps.
2) by mailing a check made out to ‘Ati Ling’
3) by calling the events coordinator at 707-544-8029 to arrange payment by credit card.

When Guru Padmasambhava, having journeyed to Yangleshö Cave in Nepal to accomplish the deity Yangdag Heruka, met with drought and famine inflicted on the region, he sent messagers to the Indian master Prabhahasti for the Vajrakilaya tantras. The mere arrival of these texts counteracted the adverse conditions, and the Guru and his consort both attained the realization of mahamudra. Afterwards he commented that Yangdag Heruka confers great accomplishment, but like a merchant who requires an escort, the practice needs Vajrakilaya to clear obstacles.

Following the example of Guru Padmasambhava and many superb lineage masters, we perform Vajrakilaya to overcome outer, inner, and secret obstacles to dharma practice and activity. We apply the skillful means of wrathful compassion to the poisons and demons of our own minds.

The complete Vajrakilaya drubchen performed at Tibetan New Year prevents the obstacles from the past year from carrying forward into the New Year. It is said in Tibet that participation in a single week’s drubchen practice generates as much merit and potential realization as a year’s retreat. We look forward to gathering with everyone!