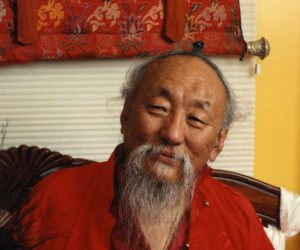 H.E. Chagdud Tulku Rinpoche (1930-2002) belonged to the last generation of teachers to have been fully trained in Tibet in the vast wealth of Vajrayana Buddhist teachings and methods. He held superb teaching lineages, primarily in the Nyingma tradition of Tibetan Vajrayana Buddhism, which he taught unceasingly throughout his life. The main emphasis in whatever he taught was pure motivation — the unconditional aspiration to bring benefit to others.

After the Communists seized Tibet in 1959, Rinpoche went into exile in India and Nepal. During the next twenty years, in various refugee camps and settlements, Rinpoche served as lama who administered to the refugees’ spiritual needs, as a camp leader who organized work projects, and as a physician Tibetan medicine.

Rinpoche emigrated to the United States in 1979. The combination of his warm personality, his depth of knowledge, and his meditative realization magnetized thousands of students. His tireless teachings led him to Europe, Russia, Korea, Hong Kong, Australia, and South America. He resettled in Brazil in 1995 after successfully establishing numerous centers and meditation groups in the United States and other places. In order to maintain his lineage teachings, he ordained a number of his Western students as teachers and gave them specific authorizations to teach.

Rinpoche’s work is maintained by Chagdud Gonpa Foundation in North America, by Chagdud Gonpa Brasil in Brazil, and by Chagdud Gonpa Hispanoamerica in Spanish-speaking Latin America. The Mahakaruna Foundation, the non-profit Rinpoche established to offer support to needy or impoverished dharma practitioners in Asia, is now directed by Jigme Tromge Rinpoche and also acts as the vehicle for sponsorship of Akshobhya practice done in Chagdud and Tromge Gompas in Tibet.

H.E Chagdud Rinpoche was a master of ritual, especially that associated with Red Tara and Vajrakilaya, as well as a Dzogchen meditator. He remains renowned for the quality of his voice, which has been preserved on many CD recordings of Rinpoche chanting T’hröma Chöd and other practices. One of the first Nyingmapa lamas to settle in the United States, he later relocated to Brazil and built the first traditional Tibetan temple in South America. The emphasis in his teachings on pure motivation for spiritual practice and all activities has inspired thousands of practitioners.

Chagdud Rinpoche, Padma Gargyi Wangchuk, was born in the T’hromtar region of Kham, the son of Delog Dawa Drolma and Sera Kharto Rinpoche. He was recognized as the fourteenth incarnation of Chagdud Tanpai Gyaltsan, a Nyingmapa siddha from Chagdud Gonpa in Nyarong, but received his early training in the Drukpa Kagyu tradition at Temp’hel Gonpa. After completing his first three-year retreat and receiving instructions from, among others, Sechen Khontrul, Sechen Rabjam, Bat’hur Khenpo T’hubga, and Jamyang Khyentse Chökyi Lodrö, he returned to T’hromtar. Several years later, following the advice of Arik Rinpoche, he entered his second three-year retreat under Tromge Trungpa Rinpoche, who told him that Tara practice would be a primary source of accomplishment in his life.

After this retreat, Chagdud Rinpoche journeyed to Chagdud Gonpa and then made a pilgrimage to Lhasa, where he met his root teacher, Polu Khenpo Dorje. Soon after, he married Karma Drolma, the younger daughter from a prosperous land-owning family in Kongpo which for generations had been known as being great sponsors of the dharma, as well as producing remarkable practitioners, civil administrators and doctors. Although the couple was abruptly separated by the turmoil in the country in 1959, they were later reunited in India and had two children — Jigme Tromge Rinpoche and Dawa Lhamo. Despite their eventual divorce, Rinpoche and Karma Drolma maintained a life-long connection that was of great benefit; Karma Drolma herself is widely-respected as an accomplished practitioner. She remained in Bir, India for some years raising the two children, then moved to Nepal, and now lives again in Bir.

In 1959, Rinpoche led Khenpo Dorje to safety in India. During this arduous flight into exile, Chagdud Rinpoche expressed his aspiration to re-enter extended retreat. Khenpo Dorje, however, admonished him to support the Tibetan people through his teaching. Thus, for the rest of his life Chagdud Rinpoche served tirelessly as a teacher, first to Tibetans and later to Westerners. In India and Nepal, Chagdud Rinpoche became deeply connected to Kyabje Dudjom Rinpoche and Dilgo Khyentse Rinpoche, both of whom he had encountered only briefly in Tibet. As well, he received transmissions from Chökling Rinpoche in Bir. As a teacher, Chagdud Rinpoche became famous for training people in the Longsal Nyingpo lineage of p’howa. As a practitioner, he became known for the effectiveness of his Red Tara and Vajrakilaya rituals, as well as the resonant power of his songs of chöd.

It was during his sojourn in Nepal that Rinpoche met American Jane Dedman, now known as Chagdud Khadro, who would later become his wife. In 1979, Chagdud Rinpoche fulfilled the aspirations of some Western students by moving to the United States. After several years, at the request of his sangha there, he established the Chagdud Gonpa Foundation, now a dynamic network of centers and activities, including Padma Publishing, which has published translations of four of Longchen Rabjam’s Seven Treasuries, Dudjom Lingpa’s Buddhahood Without Meditation, and Nyoshul Khenpo’s A Marvelous Garland of Rare Gems.

Chagdud Rinpoche first taught in Brazil in 1991, where he was impressed by the Brazilians’ natural faith and interest in the dharma. He relocated there in 1995, and in the next seven years, until his Parinirvana on 17th November 2002, he established more than twenty centers in Brazil, Uruguay, and Chile. He built the first traditional Tibetan temple at Khadro Ling, the seat of Chagdud Gonpa Brasil, in the southern state of Río Grande do Sul, supervised the work of translating sadhanas and books into Portuguese, and sculpted numerous statues, two large ones of Guru Rinpoche and a monumental statue of Akshobhya Buddha.

Three days before he died, Chagdud Rinpoche completed a life-sized statue of Amitabha Buddha that now sits on the top floor of a Zangdog Palri at Khadro Ling. Chagdud Rinpoche was planning the Zangdog Palri at the time of his Parinirvana, and from 2003 onwards Chagdud Khadro organized his students and supporters to manifest the palace according to guidance from Dzongsar Khyentse Rinpoche, Jigme Tromge Rinpoche, and Lama Rigdzin Samdrup, until its glorious completion and consecration in December 2008.

Chagdud Rinpoche’s Parinirvana occurred some hours after he taught p’howa to more than three hundred people at Khadro Ling; at the beginning of the teaching, he had made a subtle allusion to the fact that he would teach two days rather than the scheduled three. He remained in a state of meditation, with no deterioration of his physical form, for over five days after his last breath, then was taken from Brazil to Nepal. His cremation a year later has been recorded on DVD, Wisdom Fire.

Although Chagdud Rinpoche adapted easily to the West, he taught the traditional aspects of Vajrayana Buddhism — the ritual arts, including torma making, music, mudra, dance, architecture, and so forth—precisely, according to his lineages. He was revered for his Dzogchen retreats, which grew larger year by year, but he insisted that the foundational preliminary practices precede Dzogchen transmission. As a result, he left a legacy of diligent practitioners, able to deal with retreat hardships and to undertake elaborate ceremonies such as drubchens with confidence.