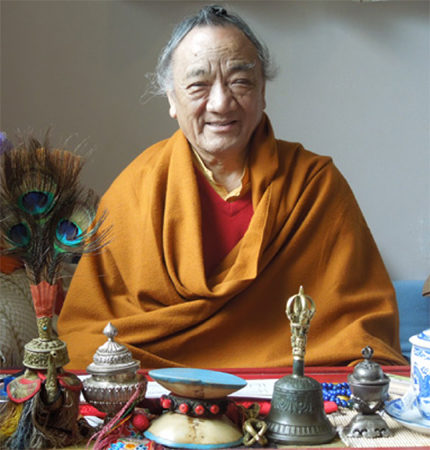 Lama Pema Dorje Rinpoche was a highly-realized master whose conduct was very beautiful to observe, someone who manifested the inseparability of perfect view and conduct. He maintained impeccable guru yoga with his teachers, was consistently caring and respectful towards his vajra brothers and sisters, and for his students he showed unconditional love and concern. For many families and communities from decades back, he was a valued friend. Despite his considerable learning and yogic accomplishments, however, he always remained humble, and was known by all for his genuine kindness, his easy laugh and quick sense of humor, and his tireless aspiration to benefit beings. Even in the last years of his life as his health declined, he worked very hard to support the many students who relied on him throughout the Americas, eastern Europe and Asia. For many years, especially after His Holiness Dilgo Khyentse Rinpoche in 1991 urged him to teach more widely, he trained students all over the world, particularly in the practices relating to chod, Green Tara, Red Tara and tsa-lung, as well as giving profound instructions on the Great Perfection. I pray that his legacy will now live on through those students who aspire to practice with the same purity and humility that he embodied.

Lama Pema Dorje Rinpoche was born in 1942 by the Ganges river in Rishikesh into a yogi family whose ancestors can be traced back to Milarepa’s paternal line. Early on, Lama Pema Dorje Rinpoche received the entire Longchen Nyingthig and Machik Labdron teachings. Through Golok Serta Rinpoche, a lineage holder of Dudjom Lingpa’s treasure teachings, he connected with the Tröma Nakmo practice and thereafter he became a follower of the Dudjom Tersar lineage, and at age 17 met for the first time with His Holiness Dudjom Rinpoche.

When our teachers pass into parinirvana, sometimes we feel lost and wonder how we can continue without them. But the precious closeness we shared with them is far from gone. We can gain confidence by relying on guru devotion, and on our sangha. Today when all of Lama Pema Dorje Rinpoche’s sangha met together to celebrate tsog, we did the practice of two sides taking turns to confess and prostrate to each other. This is an important part of how sanghas can maintain their strength and harmony. Offering tsog, reciting mantra, chanting many prayers – all these of course matter, but if we do not take the time to also genuinely confess the many little mistakes and disturbances any sangha member makes, then we are undermining not just our own practice but also the harmony and activity of the entire sangha.

When the lama passes away, we also turn to the person or people closest to them to understand how best we should act to help manifest the lama’s enlightened intention. In this case, it is Khadro Kunsang-la with whom we should stay close, so that we are properly aligned with what Rinpoche envisaged for his activity.

And truly, the key to sustaining the vitality of whatever practices Lama Pema Dorje Rinpoche gave, and reinforcing our dedication to the path, is guru yoga. For anyone fortunate enough to be a student of Rinpoche’s, by simply reflecting on Rinpoche’s humility, many pitfalls can be avoided. If we recall Lama Pema Dorje Rinpoche’s sublime accomplishments and at the same time his complete lack of arrogance, how can we become proud? If we recall the purity of his devotion and respect for his teachers and the lineages, that will allow us to see the guru manifest in all the beings around us. In this way we can again be in the embrace of the lama, whether they are physically present in this world or not. By emulating Rinpoche’s guru devotion, by aspiring to practice as purely and simply as he did, there is a far greater chance that Vajrayana teachings can be in this world for a long time still. Wherever we go, if we can carry Lama Pema Dorje Rinpoche’s joy and integrity in our hearts, that alone will be of great benefit to ourselves and to those we meet.