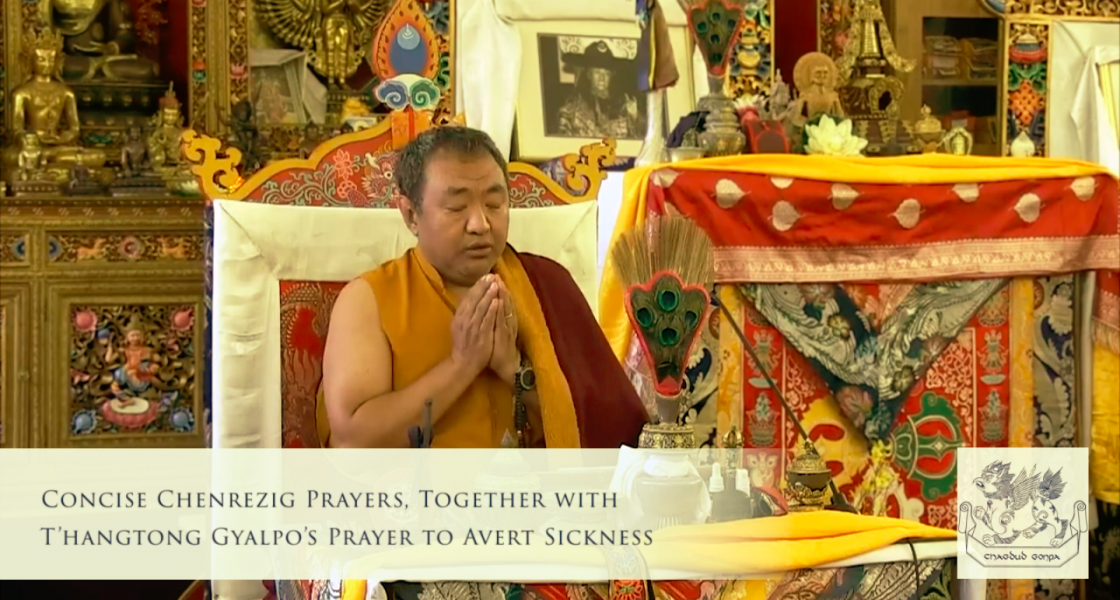 The whole world currently shares in the pain and burden of an unprecedented pandemic, with hundreds of thousands suffering fear, isolation, deprivation, and untimely and lonely deaths. We are facing situations many of us have never been in before, which can bring out the best and the worst in ourselves and our family and communities. I pray that we all remain healthy and come through this with greater clarity and strength, and also with more confidence in our practice and our capacity to support others. Here is a prayer that was written by 14th century mahasiddha Thangtong Gyalpo, when there was an epidemic in the Sakya community, that may be of benefit at this time – “The Prayer that Saved Sakya”. It is especially relevant to us as students of Chagdud Rinpoche, who was considered an emanation of Thangtong Gyalpo, and as practitioners of the Apong Terton Red Tara, so please include this, and prayers to Tara and Chenrezig, as part of your daily practice.

Below is a video of Tromge Jigme Rinpoche performing Concise Chenrezig Prayers with the T’hangtong Gyalpo Prayer to Avert Sickness. Please see the links below for a PDF copy of the practice.

Prayer for Pacifying the Fear of Disease (with Chinese)

Here is what His Holiness Sakya Trizin explains we can do: “Once when there was an incurable sickness spreading in the monastic and local community of Sakya and after every method of healing failed, Thangtong Gyalpo recited the refuge prayers, did several mani mantras and this particular prayer. It is said that the spread of the viral epidemic in Sakya ceased immediately upon the utterance of this prayer. So it became known as the vajra speech with cloud-like blessings, the prayer that saved Sakya. Please recite this prayer as many times as possible and at the very least three times a day. It is a simple prayer to avert the spread of the virus and also during times like this, you should remember the Bodhisattva of compassion, Avalokiteshvara and invoke his protection and blessings. Avalokiteshvara said in the Avatamsaka Sutra “I have caused my name to become known in the world so that beings may be freed from danger. I have blessed as many forms of myself as there are forms of beings, so that beings will think of me when necessary.” Guru Padmasambhava said “When someone is afflicted by disease or an evil influence, compared to any mundane ritual of healing or of repelling obstacles, the merit of the Six Syllables is much more effective for warding off obstacles or disease. Compared to any medical treatment or cure, the Six Syllables are the strongest remedy against sickness and evil”. So please recite the Six Syllable mantra “Om Mani Padme Hum” as many times as you can with great compassion for all sentient beings. At the end of your practice, dedicate all the merit you accumulate for the benefit of all sentient beings.”

Then, some of you may have already heard the tragic news that much of Chagdud Gonpa in Tibet was burned yesterday in a fire started accidentally by a visiting relative. The large main temple, all the monks’ quarters and two lamas’ houses were destroyed — a total of about 30 buildings. That is the unfortunate part. The fortunate part is that the small 14th century temple which houses the Guru Rinpoche statue — one of most holy statues of Guru Rinpoche in Kham — and the Mahakala relic, the Sherab Gyaltsen statue with his relics, and a stupa were spared the fire, as was the shedra lhakhang. And due to the monks’ bravery and selfless devotion, all the main holy relics of Chagdud Gonpa have been saved. Many of these had been housed in the lhakhang that burned down, and before the roof collapsed, the monks had in addition even managed to pull out the shrine-room benches. While my heart is very heavy at the news of the fire, I rejoice in the efforts of those who prevented far worse loss.

As one of the oldest monasteries in Kham, and the seat of our own teacher His Eminence Chagdud Rinpoche, this temple represents the strength and brilliance of the Chagdud lineage over many centuries. When our Chagdud Rinpoche went back there in the 1980s, he expressed his happiness about the unity of the sangha there, and the loyalty of many individuals who even through very difficult times had taken responsibility for maintaining the gonpa’s practices and its many holy objects. People and buildings come and go through the centuries, through both natural causes and disaster, but we now see again that what has survived at Chagdud Gonpa are those precious holy objects, and also the attitude of courage and devotion amongst those entrusted with their care.

Even if those of us outside Tibet are unable to see Chagdud Gonpa Tibet’s holy objects with our own eyes, we can rest content knowing that they still exist undiminished as the core of the gonpa’s material legacy, continuing to bring blessings to many beings. Then, what we have right here within us is the legacy of the intangible blessings — the teachings that we received from Chagdud Rinpoche, which he inherited from his predecessors. These include the lama dancing traditions, for which Chagdud Gonpa was so renowned that their monks would go to the mother monastery Kathog Gonpa to teach the dances.

I invite sangha all around the world to offer their prayers of support for Chagdud Gonpa, recalling the fierce tenacity of that windblown, remote mountain-top monastery, and its residents. Even now, the shedra building remains, spacious and safe, for puja to continue without interruption. As both lay and monastic practitioners everywhere reflect on whatever blessings we have received from Chagdud Gonpa’s presence in the world, and the power of the holy objects there, may we dedicate all virtue, and summon all resources, so that the structures which were lost can be restored and the community flourish again.

I pray for everyone’s health and well-being, and if impermanence and karma do not intervene, may we all gather together again soon. With love, Tromge Jigme Rinpoche

English text of the prayer:

May all the diseases that disturb the minds of sentient beings,

And which result from karma and temporary conditions,

Such as the harms of spirits, illness, and the elements,

Never occur throughout the realms of this world.

May whatever sufferings arise due to life-threatening diseases,

Which, like a butcher leading an animal to the slaughter,

Separate the body from the mind in a mere instant,

Never occur throughout the realms of this world.

May all embodied beings remain unharmed

By acute, chronic and infectious diseases,

The mere names of which can inspire the same terror

As would be felt in the jaws of Yama, Lord of Death.

May the 80,000 classes of harmful obstructors,

The 360 evil spirits that harm without warning,

The 424 types of disease, and so forth

Never cause harm to any embodied being!

May whatever sufferings arise due to disturbances in the four elements,

Depriving the body and mind of every pleasure,

Be totally pacified, and may the body and mind have radiance and power,

And be endowed with long life, good health, and well-being.

By the compassion of the gurus and the Three Jewels,

The power of the ḍākinīs, Dharma protectors and guardians,

And by the strength of the infallibility of karma and its results,

May these many dedications and prayers be fulfilled as soon as they are made.